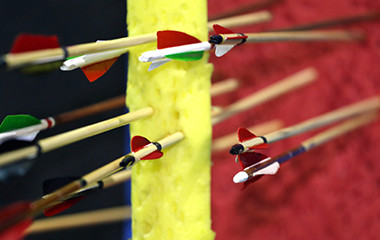 Practice Safety on the Archery Range

Archery is a popular and fast-growing sport among certain segments of the American population. From shooting inanimate targets on the archery range to taking down massive beasts with well-placed arrows, archery is a sport that can be both fun and practical. The bow and arrow, however, is a powerful and extremely lethal weapon system that has been used for hunting and for warfare for millennia, and must be handled with respect and with caution.

Archery in the U.S.: Facts & Statistics

The relatively low number of archery-related injuries is no doubt due in large part to the safety precautions practiced by both archery participants and by archery ranges (most ranges, for example, prohibit the sharp arrowheads commonly used in bowhunting).

To reduce the chances of causing injury to yourself or others while practicing the sport of archery, here are eight safety tips that should always be followed when handling bows and arrows.

Archery supplies for the range and for the field

ProLine Bowstrings is a leading supplier of high-quality bowstrings and archery supplies for compound bows, recurve bows, and longbows.