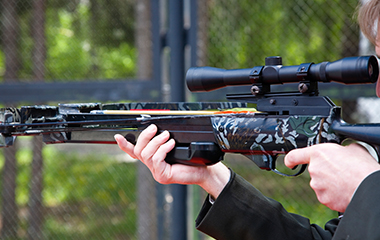 Battle of the Archery Equipment: Compound Bows vs Crossbows

One of the biggest debates in the world of archery and bowhunting is whether or not crossbows offer a significant advantage over compound bows. Many longtime bowhunters and traditionalists strongly object to the nationwide inclusion of crossbow hunters into the archery hunting seasons for deer and other game, saying that the dramatic increase in harvests will cause archery hunting seasons to be shortened in many areas.

Before we get into our comparison points, let’s go over some of the main features of these two modern types of archery equipment.

The most popular type of bow used in the U.S. today is the compound bow. This modern take on the conventional bow uses a levering system of cables or pulleys to bend its limbs, allowing for increased accuracy and energy efficiency over other types. Their accuracy and relative ease-of-draw makes them popular among both bowhunters and recreational archers.

Now let’s see how these differences between compound bows and crossbows affect their effectiveness on the field:

Modern compounds and crossbows can both be extremely accurate in skilled hands, although the higher kinetic energy of crossbows usually gives them a slight edge, especially at longer ranges. The effective range for both is about 30-40 yards for most shooters.

Compared to compound bows, crossbows are heavier and more cumbersome to wield. Their bulkier mass and shape can make them uncomfortable to shoot from a sitting position.

One of the biggest advantages that crossbows have over conventional bows is that they can be cocked and ready to shoot rather than having to be drawn before firing.

One common concern with crossbows is safety. Because a crossbow remains locked in the firing position until discharged, many are wary of the possibility of accidental crossbow firings. However, 30 years of data from archery-related accidents suggest that crossbow accidents occur at about the same rate or even slightly less than that of conventional bowls.

Archery enthusiasts and bowhunters of all types remain sharply divided on the topic crossbows. While both have their distinct advantages and disadvantages, the relative ease-of-use of crossbows has undoubtedly led to an increase in the number of archers and must be respected as excellent tools of hunting and sport.

Whatever you choose to shoot, have fun and be safe.